The VW Beetle Sedan and Sunroof late 1973.5 through 1974 (Externally Regulated Alternator equipped) Main Loom replacement includes the front to rear loom (wires from the fuse box to the engine and tail lights), with connections and highly detailed instructions. These kits are great for repairing old dried out wiring, or replacing the loom after an engine fire. All kits are Factory Color Coded, factory length and pre-terminated.
The Main Harness is the only portion of our wiring harnesses that is sold separately. We do not offer the remaining portions of the wiring harness as a separate kit! Meaning, you can't by the Main Harness first, then later order the rest of the harness later.

Currently we aren't aware of anyone offering a complete harness for use with the externally regulated harness. However if you've swapped your 1973.5-1974 Beetle to an internally regulated alternator you can order the 1972-1974 Beetle Complete Wiring Harness with Internally Regulated Alternator (linked here) instead of the Main Harness.

All of our original style replacement wiring harnesses are made in the USA with OEM AMP terminal ends. Don't trust your VWs electrical system with inferior Chinese made harnesses! 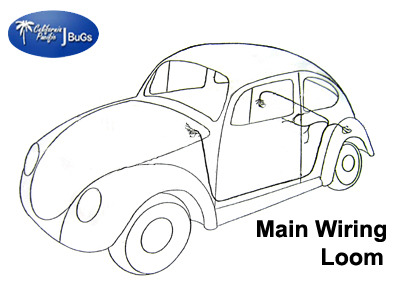 Please Note: Wiring Harnesses can only be returned if the packaging remains sealed. Once a wiring harness has been opened, it cannot be returned.
California Prop 65 Warning:

Please Note:The information listed below is for stock, unmodified VW's manufactured for sale in the US. VW's are commonly modified and very often parts from another year VW may have been installed on your car. California Pacific JBugs is not responsible for any errors if your car has been modified in any way.
VW Beetle
Sedan
1973 - 1974
Sunroof
1973 - 1974